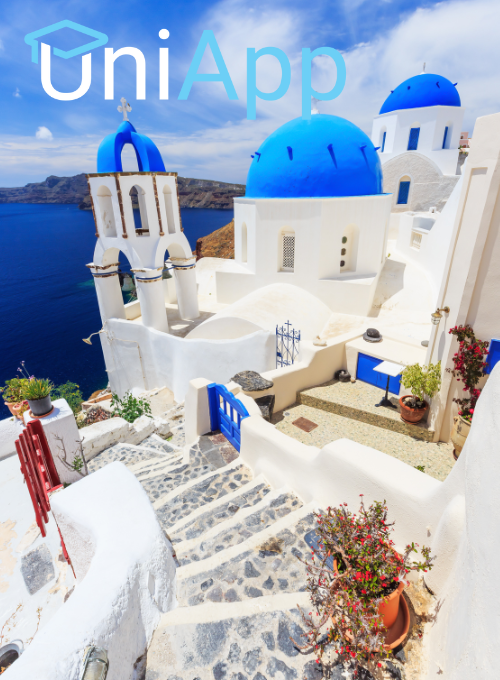 Greece is the land of white buildings, stunning beaches and great weather but did you know that Greece has some of the best universities in Europe when it comes to some subject areas. In fact, Greece has around 24 universities and 16 technical ones with most of them offering English language programs. Some even offerUK degrees when you graduate, along with the Greek degree, at a fraction of the price of UK. You can also transfer ECTS credits back and forth between other European countries as it’s part of the Bologna scheme. These are only a few of the reasons why you should study a master’s abroad in Greece. Read on to learn about several other reasons why you should study a master’s abroad in Greece.

6 compelling reasons to study a master’s abroad in Greece

Here are 6 great reasons why you should choose to study a master’s abroad in Greece, from the great education to the awesome food to the fact that you can master the Greek language:

Enjoy an affordable education and lifestyle

The first reason and perhaps the most important to you as an international student who wants to study a master’s abroad in Greece is the fact that you’ll get a great, affordable education and also good costs of living. If you are an EU student, you won’t be charged any tuition fees for your master’s degree, except for several specialised programs. International students pay reasonable tuition fees in most cases, ranging from 1,500 euros to 9,000 euros, including textbooks. Don’t fear though, the fees on the higher end of the spectrum pertain to private universities so if you still to public one, you’ll pay tuition fees that are better than all other top study destinations in the world.

Universities often also lend students related material like anthologies, novels and other study materials and they might even give them to students to use. Greece is also one of the cheapest countries to live in as an international student. In general, you’ll need to factor in around 450 to 700 euros a month for all costs of living, covering living costs like accommodation, utilities, transportation, food and internet. This is perhaps unheard of in Europe! In other European neighbours like Spain, Italy and France, you’ll pay around 950 euros on average for costs of living. Food and public transportation is cheap, with street food that is filling and delicious being as little as 5 euros. If you buy and cook your own groceries, you’ll pay even less!

Live in the best location in Europe

If you want to study in Europe, Greece is a great route to take because of its location. The fact that it has, arguably, the best location in Europe is another reason to study a master’s abroad in Greece. It’s located in the centre of the world in the Mediterranean sea so there are many flights in and out of Greek cities like Athens and Thessaloniki to many nearby countries that are affordable. For example, you can easily take a cheap and short vacation to hot travel destinations like Venice in Italy, Istanbul in Turkey or Dubrovnik in Croatia. If you want to stay local in Greece, you also have many stunning beaches, islands and temples to explore so you’ll never get bored in this breathtaking country.

Another reason to study a master’s abroad in Greece is the fact that you can study world-famous Greek degree subjects right from the knowledge source. Greece is known to take pride in their culture and history, as well as preserve it through education. This is all the more through excellent master’s degree programs that are taught in the English language so students can join them, no matter what field tickles their fancy, and learn everything about Greek culture and traditions.

For example, subjects that Greece is renowned for are philosophy, architecture and medicine, among more. What better location to study a Philosophy master’s degree than where Socrates, Plato and Aristotle were born and came to be? You can also choose to study an Architecture master’s degree and learn from Greek architectural wonders like the Acropolis, Olympia and Parthenon. Another subject to consider is Politics as Greece was considered the birthplace of democracy itself. You can also study a medicine master’s where the famous Hippocrates created his oath and many ethical topics in medicine. Greece also had a great influence on physics and maths, as the first mathematical theorem worldwide was created by Greek Pythagoras and many Greek characters are used in Math today.

Get immersed in a unique culture

A great reason to study in Greece is to get immersed in the unique culture that you won’t find anywhere else worldwide. Choosing to study a master’s abroad in Greece means you’ll get to experience the amazing Greek food, weather and hospitality. Greek food and drinks like Tsatsiki, feta, olives, gyros, tsipuro, metaxa, retsina and ouzo are tantalizing dishes that will truly delight your taste buds. Gyros, which is perhaps the most famous food, is a sandwich made of pita bread and stuffed with tomatoes, onions, tzatziki, lettuce, occasionally French fries, and a form of meat. They’re also known for a drink you probably already know: the Frappe. Greek food is not only delicious, but healthy with Greek people’s long lifespans attributed to this diet.

Greek weather is also a tempting reason to study a master’s abroad in Greece, with a warm climate all year long. The weather is especially stunning during the summer with no rain for two or three months, especially in the Southern Greek areas. In winter months, the weather barely ever falls below zero, meaning snow is very rare. So if you love the great summer weather, this is an awesome study destination to pursue a master’s degree.

Greek people are also friendly and hospitality, some of the most welcoming people in the world. If you are a local at a Greek cafe or coffee shop, you’ll probably be greeted like a friend and receive discounts and freebies. In a restaurant, you may receive a free drink or dessert. Make sure you adopt the same endearing attitude with anyone you deal with during your study abroad time! Another advantage that can get you to study a master’s abroad in Greece is the chance to experience some awesome student cities. One of the major student cities in Greece, which was once the epicentre of the whole world, is Athens. Athens today is a modern student city, known for its cool rooftop bars, historical neighbourhoods and many exciting attractions. Thalassaki in Greece is another awesome student city, the second largest one in the country with it’s own unique culture. It has had an influence not only from Ancient Grece but from Byzantium. The city is considered the modern city of Greece, with a majorly growing tourism pull. Meteora is another good student city that is considered a UNESCO World Heritage Site  because of the Eastern Orthodox monasteries that are build there. If you go to this student city, you can combine the great outdoors while learning about the unique religious history of the Greeks.

Read more: Where in the world should you study? -Best 7 student cities for 2023

Finally, a good reason to study a master’s abroad in Greece is to learn one of the most influential languages in the world. The Greek language has existed for thousands of years, with many modern words coming from it in several languages. For example, the words “democracy”, “planet” and “music” are a few words from the English language that were derived from Greek. A lot of locals speak English but not everyone, so it might be a good idea to get some basic Greek knowledge before arriving to study a master’s abroad in Greece. This will help you have an easier and more pleasurable study abroad adventure.

However, you shouldn’t be too worried if you don’t meet all of the needed criteria. From one Greek university to another, admission requirements can differ. If you have lower grades and still want to study a master’s in Greece, UniApp can give you a hand in searching for a good program with less strict admission processes so you can also study the master’s degree program of your dreams.

Finally, here are some of the application documents you may need to submit if you want to study a master’s abroad in Greece:

In conclusion, there are many reasons why you should pursue a master’s in Greece. The culture is unique and exciting, there are several awesome student cities to choose from with excellent master’s degree programs and living costs are reasonable when compared with the rest of Europe. You can also study subjects that the Greeks were experts in while being in good company, like Politics, Medicine and forms of Engineering. What are you waiting for? Look up some study programs using the Uniapp degree search today and find some great Greek master’s degree programs!

Why study a degree in public safety in 2023?