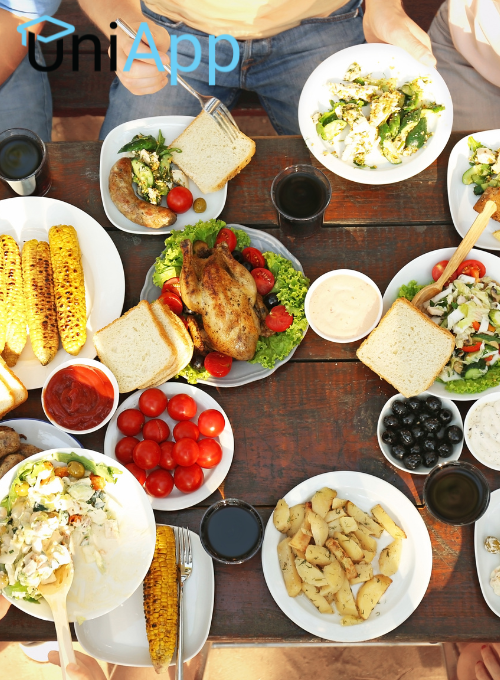 Traditional American foods are one of the opportunities to try new things as you embark on your study abroad journey. You experience a completely new life as you travel to new locations, get accustomed to a new setting, and participate in a new educational system. The food is one of the novel things you try.

Of course, foods differ from one nation to the next. Additionally, American foods are varied, delectable, and worth trying. One of the main forms of social interaction in the USA is eating out.

And the majority of us have tried American food because it has spread around the globe. But what foods will you eat there when you arrive? The following lines list the Top American Foods that visitors can try while studying in the USA:

What are the Top Traditional American Foods to Try from American Cuisine?

There is a list of the Top American Foods that visitors can try while studying in the USA:

Tater Tots have become downright iconic and came in first place among top traditional American foods. How much do we really know about these tasty crispy potato treats? They make appearances in diners, at parties, and, occasionally, in blockbuster movies.

In 2017, eater took a deep-dive investigative journey into the history of Tator Tots. It all began with F. Nephi Grigg and his brother, Golden Grigg, two determined young Mormon entrepreneurs who each owned a potato farm, selling the bounty of their land to friends and neighbors.

Tater Tots were created on the Oregon-Idaho border back in 1953 by Nephi and Golden Grig, co-owners of the Orida potato company. The brothers were looking for something to do with all the odd bits of potato left over after cutting french fries.

Eventually, everyone who tastes them will feel in love and according to industry statistics (2017-2018), Americans ate something like 36 billion Tater Tots.

We all love French fries, but the Tater Tot is an American food variation on the potato theme that is popular at Sonic drive-ins and school cafeterias nationwide.

The Ore-Ida company is the sole owner of these commercial hash brown cylinders, as can be seen from the frequent use of the registered trademark.

The Grigg brothers, who established Ore-Ida, would have wanted to find a use for the leftover potato slices if they had been you.

In 1956, they formed the mashed potatoes into tiny tots, added some flour and seasoning, and put them on the market. A little over 50 years later, the United States consumes about 32 million kilos of these potatoes every year.

When it comes to classic comfort food, it’s hard to beat this slow cooker Pot Roast. It’s honestly one of the easiest recipes to make and it serves up meltingly tender meat along with chunky, good-for-you veggies that fill you up in the best way possible.

Pot Roast is always a popular recipe during the holidays, but this version is so darn easy. It’s really perfect for every Sunday dinner. That’s why it’s called “Classic Sunday Pot Roast”.

Pot roast takes a sentimental favorite spot among the top 10 traditional American foods because it was the Sunday family dinner of every baby boomer’s childhood. Without it, an entire generation would be lost.

The pot roast is typically made with beef brisket, bottom or top round, or chuck, potatoes, carrots, onions, and anything else your mother decided to throw in to be immersed with the meat’s simmering juices.

Red wine or even beer may be added to the pot roast before it is covered and cooked on the stovetop or in the oven.

Dehydrated meat was almost unrecognizable and an unlikely source of such gustatory delight, but jerky is a popular high-protein snack among road trippers, hikers, and other snackers worldwide. It’s American food prepared the way we like our wild food to be prepared: spicy and tough.

We like the creation myth that claims it is a direct descendant of the pemmican made by American Indians, which combined animal fat and fire-cured meat.

Everything from beef to ostrich, alligator, yak, and emu to turkey, chicken, venison, and buffalo. hickory-smoked, honey-glazed, and pepper. Teriyaki, jalapeno, lemon pepper, and chili are added as flavors.

The Army is experimenting with jerky sticks that contain the same amount of caffeine as a cup of coffee because jerky is so adaptable, portable, and nutritious.

Although it is a staple of Southern cuisine, cornbread is also a staple of many other cultures, including black, white, and Native American ones. But it is still one of the traditional American foods.

It is not only popular south of the Mason-Dixon line. Grits are made by coarsely grinding corn; hominy is made by soaking kernels in alkali (which we encourage you to cook up into posole).

Cornbread is made by adding baking powder to finely ground cornmeal. Whatever its variation, cornbread is still the quick and simple go-to bread that historically made it a fave of Native American foods and pioneer mothers and continues to keep it on tables all over the country today.

Variations include Southern hushpuppies and corn pone, New England johnnycakes, cooked in a skillet or in muffin tins, and flavored with cheese, herbs, or jalapenos.

The chicken fried steak was created to go with traditional American dishes like mashed potatoes and black-eyed peas, making it one of the ultimate guilty pleasures.

It is similar to the Weiner Schnitzel that German and Austrian immigrants brought to Texas and modified to use the plentiful beef found there.

It is a slab of tenderized steak breaded in seasoned flour and pan-fried. However, John “White Gravy” Neutzling of the Lone Star State cowboy town of Bandera insisted he invented the dish.

Lamesa, on the cattle-ranching South Texas plains, claims to be the dish’s birthplace.

It’s one of the simplest traditional American foods. When “Cannelton of Beef” first appeared in Fannie Farmer’s 1918 “Boston Cooking School Cook Book,” who would have thought that every mom in America would eventually have her own version?

When Fannie made hers, she topped it with slices of salt pork and delivered it with brown mushroom sauce. (In her time, the meat had to be hand-cut into extremely fine pieces; the invention of industrial grinders changed everything.)

Whatever your mother made it with—ketchup on top, perhaps?—she most likely served it with mashed potatoes and green beans.

More than just the regatta-loving, tanned class in their sockless topsiders can be found in the Chesapeake Bay. It is the blue crab’s natural habitat, which Maryland and Virginia both claim as their own.

Crab cakes can be prepared in a variety of ways, including boardwalk style (mixed with fillers and served on a bun), restaurant/gourmet style, fried, broiled, or baked, but for both tradition and taste, blue crabs from the Chesapeake Bay are preferred.

Editors of Baltimore magazine compiled a list of the top restaurants serving the area’s specialties and declared simplicity to be the key, grieving the fact that most crabmeat these days isn’t even caught locally.

The traditional American foods mentioned above are just a few of the mouthwatering dishes that international students can sample and savor while studying in the USA. Every American state has its own cuisine. Maryland’s cuisine is distinct from North Carolina’s.

American food is different in the North from the South. Students thus find themselves in a huge restaurant with a huge selection of dishes. They have no choice but to savor that food, pick what made their mouths water, and try it along the way.

Top Things to Do in France for International Students | 2023