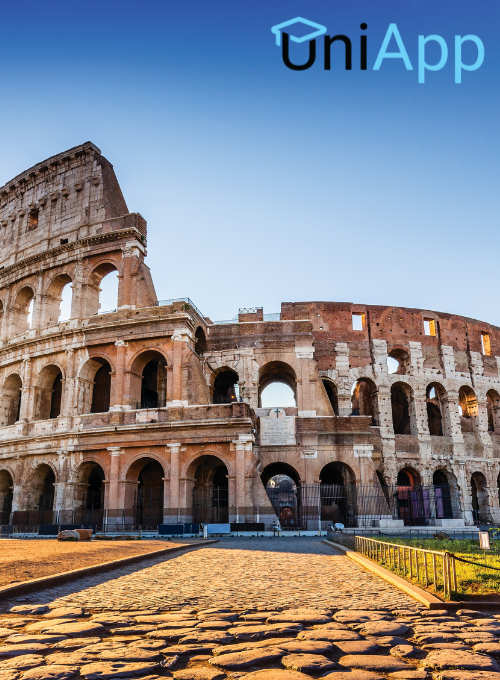 One of the best options to study abroad is discovering What to Study in Italy in 2023 and knowing the greatest universities in the world.

If you are interested in obtaining a bachelor’s degree, or as it is called in Italy Laurea or Laurea Majesty, which means a master’s or doctorate degree (Dottorato di Ricerca).

Italy can provide it to you at a reasonable price and high quality of education. In this article, Uniapp will help you with what to study in Italy.

What are the requirements for international students to study in Italy?

There are around 32,000 international students in Italy, including independent students and students on exchange programmers.

With a rich history and tradition in higher education, Italy is always an attractive option for students. Here are the general requirements for applicants:

2- You must also have completed at least 12 years of education as evidenced by your high school diploma (must be translated into Italian).

These are the two prerequisites. Other requirements include the submission of the following documents:

Whereas postgraduate students need to provide an undergraduate degree instead of a high school graduation certificate.

Italy is the land of art, literature and splendid architecture. It was also the country where 13 of Shakespeare’s 38 plays were set, a tribute to how magical it truly is.

There are several reasons why you should choose to study in Italy. For example, it is home to some of the oldest universities around the globe, offering excellent standards of education to international students.

The education system there is renowned, and you can be sure that you’ll graduate with specialized knowledge in your field. Here are some more reasons why you should study in Italy:

One of the main reasons to study in Italy is the moderate cost of living. It’s cheaper than other European countries, though it may still be more expensive than others.

If you have a low budget for living, be sure to avoid universities in Rome and Milan as they are the most expensive Italian cities to live in while studying. If you choose to live in other cities, you can expect to pay the moderate cost of less than 1500 euros monthly.

Another reason to study in Italy is the excellent standard of education offered at top-ranking universities. For example, 27 Italian universities rank in the top 500 universities list in the world.

Though some universities may have very high acceptance rates of more than 80 percent GPA fulfillment, you can search for a university that doesn’t have such high requirements, if your grades aren’t paramount.

Option to Study in English

Another benefit is that many degree programs are taught completely in English. Italian universities offer you the chance to study either in English or their native Italian tongue.

This includes degrees that are undergraduate and postgraduate degrees, so you can study in a great culture in the language you are comfortable studying in. Many universities also offer Italian language courses for students who are studying in English but want to learn the Italian language.

We offer you 5 majors to study in Italy as a quick starting point. what are you waiting for? Get the right ideas now!

When you study architecture in Italy, you will get a valuable opportunity to learn this field from some of the best architects in the world.

Italy has a group of ancient buildings-built thousands of years ago such as the Forum, the Colosseum, and many of the most beautiful churches in the world.

In addition, the Polytechnic University of Turin ranks 14th in the world, thanks to the excellence of the Bachelor of Engineering specialization offered by the university.

The university also offers a range of scholarships for international students based on merit. If you are interested in majoring in architecture,  Uniapp can help read more about this major!

Among these universities, the University of Milan offers a European Bachelor of Medicine program that allows graduates to train in all European countries.

Medical specialization in Italy is inexpensive compared to the United States and the United Kingdom. But, if university fees in Italy are somewhat expensive, you can apply for financial aid or a scholarship through donors, donors and the Italian government.

For this reason, obtaining a degree from an Italian university in the field of physics and astronomy is a strong advantage, which makes you a strong competitor when applying to a job in this field, thanks to research methods and scientific progress, especially at the Sapienza University of Rome in Rome which ranks 22 globally or Pisa University, which ranks 30th globally in the field of physics and astronomy.

When it comes to universities in Italy, most of them are excellent institutions, but some truly stand out that you should consider when choosing a university to apply to.

Popular specializations in the university include are agriculture, science, engineering, economics and pharmacy.

Second-ranked in Italy is the University of Naples, which is the oldest public university in the world. It was founded in the year 1224 and has thirteen different colleges with subjects that include architecture, agriculture, economics, law and medicine, among many others. More than 100,000 students study in the university.

Founded in 1088 AD, the University of Bologna is located in the city of Bologna. It has twenty-three colleges, with many different subject areas offered.

The subjects the university is most well-known for are agriculture, art and engineering so if you are interested in these subjects, research the university and consider applying there. The university loves and welcomes international students because it is a great Italian landmark.

Barry University is located in the city of Bari and founded in the year of 1925. Sixty thousand students study at the university and specialize in subjects like arts, philosophy, biotechnology and communication studies.

The University of Turin can be found in the Northern Italian city of Turin and is another highly ranked ancient university.

Founded in the year 1404, the school has thirteen schools, with ten institutes in them.

Examples of these schools include the School of Applied Psychology, School of Business and Joint School of Automotive Sciences. If you are interested in studying any of these subjects, it’s well worth looking into the universities.

Should you study an Engineering Master’s Degree in Germany or USA?