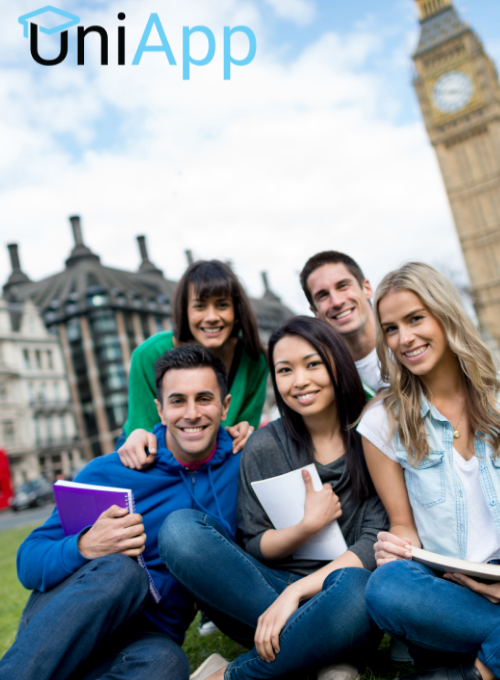 Every year, thousands of students from all over the world what to study in the UK in 2023?, making it the top choice for international students in Europe and the world.

At the very least, British higher education will provide you with a world-class education and a bright future. In this blog Uniapp can help you find 5 best courses to study in the UK along with all the relevant details you need to know to pick the right one!

The island of Great Britain, which lies just off the northwest coast of continental Europe, is shared by England, Scotland, and Wales.

Northern Ireland, the fourth country, is a portion of another island that is divided between Northern Ireland and the Republic of Ireland, an independent country, in the south. Bermuda and Gibraltar are two of the United Kingdom’s overseas territories.

For many international students, to study in the UK is a bless and a boon. The country has the fifth biggest economy worldwide and the second-biggest in Europe.

It has centuries-old universities considered a source of enlightenment over time. Such universities provide high-quality education at the hands of the best cohorts of professorate you may ever encounter.

The UK higher education system is comprehensive and superior in many fields of study. The UK is among the top destinations for students interested in business, engineering, humanities and STEM studies.

Statistics indicate that 82% of graduates of physical and physical therapy specialties get a good job within the six months after graduation, as hospitals and sports teams are constantly seeking to hire their cadres of physical therapists whose tasks are heat therapy, massage and exercise.

Interest in this field increased after the recent global financial crisis, which depends mainly on the use of mathematics and statistics to assess financial risks, and is considered the ideal choice for students who want to know how to solve financial problems and enter professions related to accounting and insurance.

Psychology is still one of the most popular study programs among students, and this major focuses on the way the human mind works, which ultimately means determining why people behave in a certain way.

As a surprising result, this major is one of the most popular study programs in the country, but it seems that students are starting to turn to this major associated with the creative development of makeup and fashion.

Thanks to the growth of the global film and series market and its high production budgets, those with a higher degree in this field can find very exciting jobs.

Law has been one of the most popular university majors in the UK over the past few years, with a large number of British and international students choosing to enroll in one of the study programs related to legal aspects and justice.

Best universities to Study In the UK

The United States ranks as the second largest study destination in the world after the United States, according to the (QS) organization for ranking universities around the world.

It is also home to the world’s oldest universities such as Cambridge and Oxford. Let’s get acquainted with the ranking of the best universities in Britain and the costs of studying there for international students by academic level.

The University of Cambridge, located in the heart of the ancient city of Cambridge, 50 miles north of London, is a collegiate public research institution that serves over 18,000 students from all over the world.

The university is made up of numerous listed buildings and is divided into 31 autonomous colleges, many of which are located on the famous Cam River.

Applications are made to individual colleges rather than the university as a whole. You can live and often be taught in your college, where you will receive small group teaching sessions known as college supervisions.

Imperial College London, ranked seventh in the world in the QS World University Rankings® 2022, is a one-of-a-kind institution in the UK. It focuses exclusively on science, engineering, medicine, and business.

Imperial provides a research-led education that exposes you to real-world challenges with no easy answers, teaching that challenges everything, and opportunities to work in multi-cultural, multi-national teams.

The London School of Economics and Political Science (LSE)

It is considered a global center of academic excellence and innovation in the social sciences, ranking second in the world for social sciences and management.

In the most recent Research Excellence Framework, 50% of all LSE research received the highest 4* rating—a higher proportion than any other university in the UK.

The University of Bristol, established in 1876, provides a world-class learning environment. Bristol, a beautiful and vibrant city in the south-west of England, is home to the University campus.

Bristol offers over 600 undergraduate and postgraduate English-taught universities degrees. Students are taught in cutting-edge facilities by academics who are thought leaders in their fields.

The University is at the forefront of global research. Bristol, a member of the Russell Group of UK research-intensive universities, is a top five UK research institution.

Why should you as an international student pick UK?

To study in the UK, it’s a surely right decision. There are many reasons for you to immediately head to the airport and start this interesting journey.

Employers want high quality graduates who have a host of certain skills such as effective, critical, and creative thinking skills. UK education is recognized by employers, universities and governments across the world.

Academic standards are of high prestige and the education will give you a solid foundation to boost your potential for having a top salary and finding the job you have always been dreaming of.

Students studying a full-time undergraduate or postgraduate degree course at a recognized university are allowed to work part-time during term for up to 20 hours a week and full-time during the holidays.

The majority of undergraduate courses in the UK take three years to be accomplished. Shorter courses mean a quicker graduation and less money spent on things such as tuition and living costs.

Two-year degrees are an increasingly popular option, while most postgraduate programs continue for just one year.

The UK has a rap sheet of welcoming international students to study at its universities. Those who decide to study in the UK will be rubbing shoulders with some of the brightest minds from all corners of all over the world.

The English language is of critical importance in today’s global business arena. Employers want people with a grasp on English and there is no better way for you to learn English than to learn it in the country of its origin.

Students can immerse themselves and learn to live, work, and think in the English language, boosting their employment potentials.

In the UK, students will get the chance to mix, meet and interact with over 200,000 international students from across the globe. As a student, you will learn more about different walks of life.

It’s an interesting reason for you to study in the UK. Living in a vibrantly diverse society enables you to gain a more encompassing mentality.

Through studying in the UK, students will be immersing themselves in centuries of high-quality academia.

Universities in the UK are inspected by the Quality Assurance Agency for Higher Education on a regular basis to ensure that they maintain the high standards of learning which are expected.

As a student you will obtain the opportunity to be taught by the world’s leading academics and to be creative and develop skills sets and confidence.

As of July 1, 2022, international students who have successfully accomplished an undergraduate or master’s degree will be able to benefit from two years’ work experience in the UK upon graduation, through the new Graduate Route . Students who complete their PhD will be able to stay for three years.

Finally, study in the UK may be the dream of every aspiring student. It is an ancient country and has highly competitive universities. Therefore, the student must be on the required level of diligence, and remember that nothing is impossible.

What you need to know about Ivy League Universities